History of the Rosary (as commonly prayed)

The rosary is a form of combined prayer and meditation that has been around for over 1200 years. The origin of the rosary dates back to the ninth century where Irish monks would recite and chant the 150 Psalms of the Bible as a major part of their worship. People living near the monasteries were drawn towards this beautiful and harmonious devotion, and they became very eager to join in with the monks’ prayers.

As this form of devotion became increasingly popular, people started to devise methods in order to keep track of their prayers.  At first, 150 little pebbles were placed inside small leather pouches to keep count.  Since this method was rather troublesome, a thin rope having 50 knots on it was used instead (it was used three times for a total of 150 prayers). Eventually, the instrument of choice became the use of string with small pieces of wood. 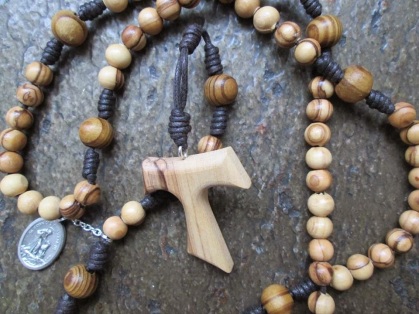 In later years, the Irish monks traveled throughout Europe and brought this form of devotion with them.  In some areas, both clergy and lay people began to recite the “Angelic Salutation” (the first part of what we now know as the “Hail Mary”) as part of this devotion.  The popularity of this prayer led to the adoption of 50 Angelic Salutations being said for each piece of wood or knot on the prayer string.

During the 13th century, Medieval theologians began to interpret the 150 psalms as veiled mysteries about the life, death, and resurrection of Jesus Christ.  They began to write a series of Psalters, or praises, in honor of Jesus for each interpretation of the psalms.  In addition, 150 Psalters honoring Mary were also composed.  In order to fit the existing prayer string, these Psalters were divided into groups of 50 and were referred to as “Rosariums”.  Although “rosarium” refers to roses and rose gardens, it was used to signify a collection of prayers which could be compared to a bouquet of roses.

As we see today, the rose is a very popular symbol associated with our Blessed Mother Mary and it is a sign that she often uses as she did in the story of Our Lady of Guadalupe. 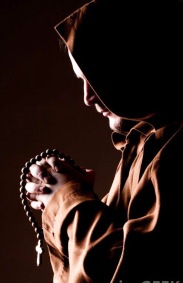 The interpretation of the psalms into written Psalters lead to the implementation of special thoughts or meditations being attached to each bead.  This innovated version of the rosary was widely spread by Blessed Alan de la Roche of the Dominican Order, as it revived the divinely inspired works that St. Dominic and his Rosary Confraternity had initiated some hundred years earlier.  The prayers of the Rosarium were later broken out into sets of 10 and these groupings became known as decades.  Each decade of ten “Hail Mary” prayers would be preceded by one “Our Father”.

Around the year 1700, the thoughts used in the rosary started to become narratives.  St. Louis de Montfort composed the most common set of narratives that eventually became used as meditations for each decade of the rosary.  These narratives were divided into five Joyful, five Sorrowful, and five Glorious meditations that are referred to as “mysteries”.  Just recently, in 2002, Pope John Paul II introduced another set of five meditations referred to as the “Luminous Mysteries”.

As you can see, the rosary we know today is the result of many evolutions dating back several hundred years.  Although the manner in which the rosary is recited has changed, the results of praying the rosary are still the same.  Countless interventions still occur today, and the power and divine graces the rosary offers are available to everyone who is willing to give it a chance.

History of the (Franciscan) Crown Rosary

The Franciscan rosary, or as it is properly called, The Franciscan Crown, dates to the early part of the 15th century. At that time a young man who found spiritual joy in weaving a crown of wild flowers for a beautiful statue of Mary decided to enter the Franciscan Order. After entering the community, however, he was saddened when he no longer found the time to gather flowers for his personal devotion. One evening, while feeling tempted to abandon his vocation, he received a vision of the Blessed Virgin Mary. The Virgin Mother encouraged the young novice to persevere by reminding him of the joyfulness of the Franciscan spirit. She also instructed him to meditate daily on seven joyful events from her own life as a new form of the rosary. Instead of a crown of flowers, the novice would now weave a crown of prayers. Before long, many other Franciscans began to pray the Crown and soon it spread to the entire Order, becoming officially established in 1422.

In addition to developing this Marian devotion, the Franciscans are credited with adding the final words to the Hail Mary: “Holy Mary, Mother of God, pray for us sinners now and at the hour of our death.” In 1263, Saint Bonaventure, 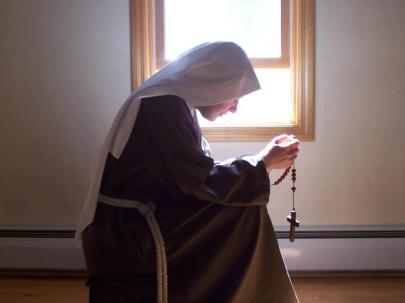 Minister General of the Order, encouraged liturgical devotion honouring the mystery of the Visitation. Saint Bonaventure also popularized the daily triple recitation of the Angelus which it is believed Saint Francis initiated after visiting the Holy Land. Francis was deeply impressed by the Muslim practice of stopping to pray several times a day, and desired to Christianize this pious custom. A Franciscan pope, Sixtus IV (1471-1485), introduced the feast of the Immaculate Conception and the feast of Saint Joseph as husband of Mary. He also issued the first papal pronouncement encouraging the rosary as in invaluable instrument of personal and societal conversion.

To this day, Franciscans hold Mary in special esteem, and it is no surprise that honoring her and beseeching her interventions through praying the varied rosaries continues as a spiritual discipline. 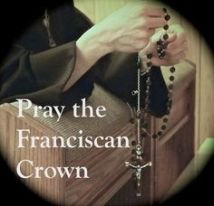 HOW TO PRAY THE FRANCISCAN CROWN ROSARY