For the first five or six centuries of our church history, members were required to avoid serious sin. The penalty for serious sin was excommunication from the community. 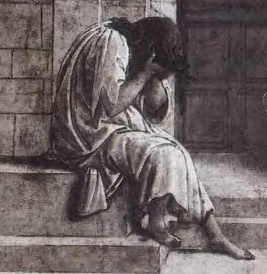 However, one was allowed to rejoin the community on a “second chance” very restrictive basis. This reconciliation required severe penance such as lifelong fasting, abstinence from attending church functions and from reception of the Eucharist, external displays of self degradation: sack-cloths, and the like. In time, these strict rules became canon law, with the bishop authorizing and overseeing reconciliation.

Changes in restorative penance in Europe and Asia were influenced by Celtic monks who practiced “private” penance: the priest would assign a penance at his discretion, the severity in accordance with the gravity of the sin. About the same time there were those who volunteered to become penitents, with the same obligations of the canonical penitents, in order to become holy – to live like Jesus and the Apostles.

These volunteers were the precursor of the penitential movement, as embraced by St. Francis of Assisi. “With the growth of private penance [given by a confessor], there was a clear distinction between the public penitents and the voluntary penitents. These first made expiation for their sins in the manner prescribed for days, months, and years as established by the Penitentials; the second group, the voluntary penitents, remained in Ordo Poenitentium for the rest of their lives. These are the two aspects of the Ordo Poenitentium through the middle ages.

The same concept of conversion, as the internal and external act by which the Christian, not weighed down by serious sin, and therefore not obliged to do so,

publicly decided to abandon the way of life which he had formerly led and to devote himself to God in one of the various forms of penitential life, reveals that the ultimate goal of such a choice was to make God one’s point of reference and the very reason for life; this end was obviously very spiritual. This interior decision, however, was also externally visible by means of the penitential habit.”
…It seems legitimate to affirm that the dominant element always present in the various
religious movements of the twelfth century was the continuation and diffusion of the desire – already present in the second half of the eleventh century – to return to the gospel life of the apostles, considered as the norm and model of poverty and of evangelization for the whole Church.

…This is a fundamental point for an understanding of the ‘new penitential climate’ of the twelfth century. While in the past only monks had been considered followers of apostolic life, during the reform the conviction spread that this life was identified with the Christian life, and must be followed by all believers.
At the same time, especially in the first half of the twelfth century, the concept of the apostolic life acquired a new element in addition to that of poverty, namely, preaching, especially in an itinerant lifestyle.

It Was the Time of the Preacher

“The first itinerant preachers, canons regular, were the most significant examples of this. They left the canonical life first to become hermits and later to begin their itinerant preaching in strictest poverty, precisely because at that point they felt that these two elements – a life of poverty and preaching –

were the essential components of a truly apostolic life. “It is most  important to note that the itinerate preachers – who began their wandering at the beginning of the twelfth century, lived in poverty, preached as the apostles did, and gathered groups of followers – found themselves immediately faced with the problem of how to insert themselves and their followers into the structure of the Church, which did not envision groups whose members while aiming at the perfect evangelical life, did not at the same time live according to a rule and in a monastery. Thus there was no place for the groups who roamed about the countryside.
This presented a threefold development. “Many of the itinerant preachers and their followers entered the pre-existing religious orders or formed new ones. Many laymen and women who had followed the itinerant preachers joined the penitents, that is, they entered into the canonical penitential state established by the Church for repentant public sinners.

Others were incautiously attracted by the growing poverty movement which rebelled against the ecclesiastical orders and which soon became heterodox. “Unfortunately, what was lacking in the twelfth century was the foundation of a religious order which would have as its ideal not only the apostolic and poor life of the gospel, but also preaching in the midst of the people to encourage, support, and guide those who aspired to an apostolic and evangelical Christianity.”

It was into this time and void that Francis appeared.

The apostolic life of St. Francis and of his first companions started from their experience of “conversion.” Conversion that is expressed in a personal pledge of interior transformation and in a gift of illumination for others: to convert oneself and to preach conversion.

For Francis, to convert oneself interiorly is to recognize the universal paternity of God over all creation and to recognize the universal fraternity of humankind with all creation. Initially, Francis and his companions were known as “the penitents of Assisi”. Almost 800 years ago, Francis exactly anticipated, so to speak, the contents of the II Vatican Council by recognizing the relevance of the ‘Theology of the Laity’ in his day. In drawing from the evangelical purity of the origins (Christ and the apostles), Francis restored the Church giving full citizenship to all components of the human family and the “Church” (clerics, men and women, religious and laity) for assuming responsibility for spreading the Gospel of Christ. The Crucifix of San Damiano entrusted Francis with a mission: “Francis go, repair my Church, which, as you see, is all in ruins.” In order to pursue the mission Christ inspired him to give life to a triple militia /host (FF1031). All three Orders generated by Francis, are in fact heirs of the mission and of the charism to accomplish it.

The raison d’être for Francis and his spiritual family is this mission, as Paul VI affirms, “The vision of Innocent III of Francis which holds up the Lateran Basilica, that is, the Church, the mystical body of Christ, in its historical and central expression, hierarchical and Roman, has foretold the vocation and the mission of the great Franciscan family.” (General Chapter OFM, June 23 1967).
The new penitents wanted to tie their penitential renewal to the name and spirituality of St. Francis. The new Order of Franciscan Penitents bloomed in the hands of St. Francis.
Consequently, the Franciscan penitents (and therefore the Secular Franciscans of today) are the lay faithful of Christ pledged to the Gospel, applying the Gospel to life and life to the Gospel daily. This requires a full response to the call to follow the humble Christ, poor and crucified, exactly as the brothers of the First Order and the sisters of the Second Order, each one in his/her own state of life.